Background
As some of you may know (it made the national news), three towns in Calder Valley - Todmorden, Hebden Bridge and Mytholmroyd - suffered flooding just over 2 weeks ago when torrential rain caused the river Calder to burst its banks.

Around 900 homes and businesses were affected, with many residents finding their cellars or even ground floors rapidly filling up with water as the river Calder and (at least in Todmorden) the canal overflowed. Although flooding is sadly not uncommon in the upper Calder Valley, the amount of rain that fell on Friday 22 June was almost unprecedented. I have heard reports that the equivalent of a month's rain arrived in only a few hours.

Responding to the floods
There was some criticism by local people that initial relief efforts were not well coordinated, but  pretty quickly community spirit kicked in as local volunteers and council workers came together to organise relief efforts.

Word spread via social media, council flyers and local charities and soon donations came rolling in. I was in fact alerted to the voluntary efforts by an old school friend with whom I am connected on Facebook. People gave both money and items such as bedding, towels, kitchen equipment, furniture and toys to help those whose own possessions had been damaged or destroyed by flood water.

The need to replace essential household items is, at least in the short term, urgent, as even people who can claim on their house insurance face a delay in receiving money and in the interim it is very difficult to manage without basic items. There were many requests for white goods, particularly fridges, from people whose kitchens were flooded.

Some of the people flooded were those unable to afford home insurance due to living in a property with flood risk, which is an issue I am currently investigating. I know that some other European countries e.g. France, pool flood risk, so that the cost is shared between all insured householders, which means that home insurance is no more expensive for people living in flood risk areas as those who live elsewhere.


Calderdale council set up temporary relief operations in each of the affected areas to distribute donations and the supplies consisting mainly of mops, buckets, brushes and disinfectant cleaning products, which were in part purchased by the Council and partly donated by local businesses and charities.


Clean up operations were also organised from the relief centres and council workers and volunteers were duly dispatched to help mop up flood water for those flooded householders who were not able to do it themselves.

My visit
Being a Todmordian myself, I went over to the flood relief centre last Friday to offer my help and to find out what was going on and if I could do anything in my official capacity to help. I was able to help by taking supplies to some flood struck residents, handing out flood cleaning up packs to people who came in, and moving boxes around the hall. 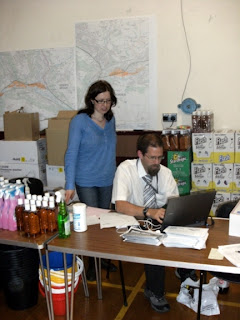 I made indeed a very modest contribution compared to those who had spent hours cleaning up flood water from people's homes.

Here I am at Calder College, Todmorden at the temporary flood relief centre having relief activities explained to me by Council worker Ben Crowther.

Posted by Rebecca Taylor LibDem at 07:11