Last week, I went up on to the moors above Hebden Bridge with activists from Treesponsibility, a local environmental group, to learn about blanket bogs and the important role they play in the ecosystem.

The Calder Valley, where I grew up, has pretty towns and stunning countryside, and an unfortunate tendency to suffer flash floods. On 22 June this year a months worth of rain fell in a few hours and resulted in serious flooding in Todmorden, Hebden Bridge and Mytholmroyd (see my blog post: Flood relief in the Calder Valley). Further, albeit less serious floods also occurred in mid July (see media article: Flash flooding hits the Calder Valley again)

There are many factors at play in a flood including drain capacity, river floodgates, rainfall and as I learnt this week, blanket bogs. Healthy blanket bog has lots of Sphagnum moss, which absorbs huge amounts of water and releases it slowly. This is particularly useful in the event of heavy rainfall as it can lessen the impact of flooding. 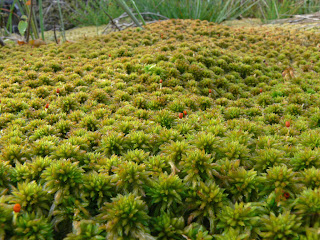 Blanket bog is also a rare habitat protected by national and European legislation including the EU Habitats Directive and the EU Water Framework Directive. Due to the fact that the Sphagnum moss in blanket bogs is what stimulates peat production, blanket bogs are often also classed as sites of special scientific interest (SSIs).

Treesponsibility have discovered that the blanket bog on Walshaw moor above Hebden Bridge is currently very degraded, which is of great concern for a flood prone town.  Walshaw Moor is privately owned by Walshaw Moor Estate limited whose main activity is the organisation of grouse shooting. 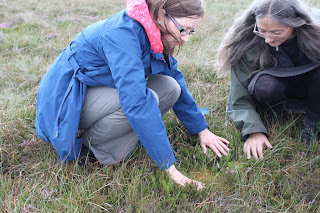 Sphagnum moss needs very wet conditions to thrive and the many drainage ditches currently found on Walshaw moor have dried out the ground and may have contributed to the degradation of the blanket bog. Digging ditches and pathways (we saw pathways that appear to go beyond their original boundaries as per ordinance survey maps of the area) also exposes peat, which releases carbon dioxide, the main gas responsible for global warming, in to the environment.

In addition, heather burning has been taking place on Walshaw moor. As grouse breed and feed in young heather, the land owners are allowed under the Heather and Grass Burning code to undertake some heather burning to allow new heather to grow.

However, the amount of heather burning that had taken place and how close it was to the blanket bog, was of great concern to the Treesponsibility activists, who feared that it might be a key factor in the degradation of the blanket bog.

Walshaw Moor Estate is legally bound to meet the requirements of an Environmental Stewardship Agreement (ESA) laid down by Natural England.  Natural England had begun legal action against the Estate for breaches of a previous ESA. This legal action was halted with the conclusion of the new ESA.

Treesponsibility organised a "ban the burn" march on Sunday 12 August to draw attention to the problem of heather burning and the degradation of the blanket bogs on Walshaw moor. 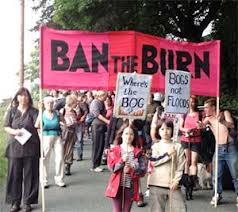 One of the Treesponsibility activists has asked Natural England for some clarifications in relation to a number of specific aspects of the new ESA to understand what Walshaw Moor Estate is now required to do, what they cannot do, and whether they are respecting the agreement.

As a Calder Valley person and a member of the European Parliament's Environment Committee, I am following this issue closely and looking forward to seeing Natural England's response to the Treesponsibility information request. 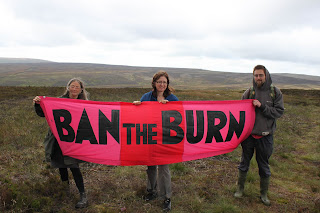 My visit to Walshaw Moor

Posted by Rebecca Taylor LibDem at 11:45